This is Melton Constable Hall Model (NWHCM : 1971.386).  It was originally built as an architectural model in the 1660s. Later it was used as a dolls’ house and passed through generations of the Astley family. It is on display at Gressenhall Farm and Workhouse in the Museum of Norfolk Life gallery. The model is currently being promoted at Norwich Castle, along with other fine examples of dolls’ houses across the county’s museums, within the V&A Museum of Childhood’s exhibition Small Stories at Home in a Dolls’ House.

In this blog Lauren Ephithite, Assistant Curator shares her thoughts about the model.

My first encounter with the Melton Constable Hall Model was in 2009 when I started working at Gressenhall Farm and Workhouse as part of the Visitor Services Team. The model was on display in a huge case in the main hall. To be honest, I didn’t think very much of it. Yes, it was old and quite an impressive model to have survived so long, but I thought it was boring and took up a lot of room! It was on display to illustrate the big houses and estates in Norfolk.

Later when I returned to Gressenhall to work as Assistant Curator, one of my first jobs was to research some of the objects regarded as being most significant in the museum’s collection. To my surprise one of them was the Melton Constable Hall Model, so I did a little research…

The model was built in the 1660s to show Sir Jacob Astley and his family what their new house would look like. Melton Constable Hall is a grade 1 listed building which isn’t open to the public. It is famous as the location of the 1971 film ‘The Go-Between’ which is a film I’ve never seen!

The architect for Melton Constable Hall is not definitely known but we think it was probably Astley himself. At this time it was common for ‘gentlemen-amateurs’ to work alongside a specialist craftsman to design buildings. For his new home it is likely that Astley worked with a designer or architect to create this model. During the seventeenth century, models such as this one, were considered very important when developing architectural designs. No drawings of Melton Constable Hall survive, therefore this model is the only surviving visual document to show the development of the hall’s design.

The model is made up of five layers which stack up to create the house. In these layers there are details of the inside of the hall like dividing walls, staircases and fireplaces. It is the oldest surviving model to include these features and that makes it extra special.

I also found out that that this model had featured in exhibitions all over the world, including Paris, Italy and Washington! All of a sudden I had a great deal more admiration and affection for this wooden model sitting in Norfolk’s Rural Life Museum.

When we started the Voices from the Workhouse project, redisplaying the workhouse and rural life galleries, I was determined that this model would be displayed and interpreted so that we could all appreciate it. It is now displayed in ‘exploded’ form so that you can see inside the layers, revealing the intricate detail. 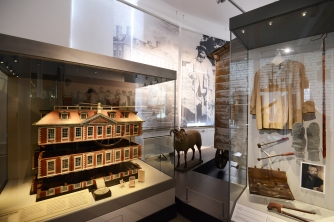 Before the model was donated to the Museum Service it had been passed through generations of the Astley family. It had been used as a dolls’ house. They must have been very careful when playing with it, as is in excellent condition at 350 years old! The front does not lift off, as in a traditional dolls’ house, so each layer must have been played with separately. We have included some dolls’ house furniture in the case and inside the bottom layer of the model to show that it was used as a dolls house.

What do you think of the model? Do you like how it is displayed now?